I’ve been increasingly convicted of the necessity to memorize scripture… both for myself and for my family. A quote from a session in the current Beth Moore Bible study I’m participating in hit me particularly hard:  “What good does it do to believe ‘the Word’ without any remembrance of the words?”

I believe God can speak to us in certain situations by reminding us of His truths that have been memorized long ago. I’ve intended on making these printable scripture cards for a while now, but finally spent a few hours finishing it on Saturday. It took a lot of time to find bible verses for every letter of the alphabet! 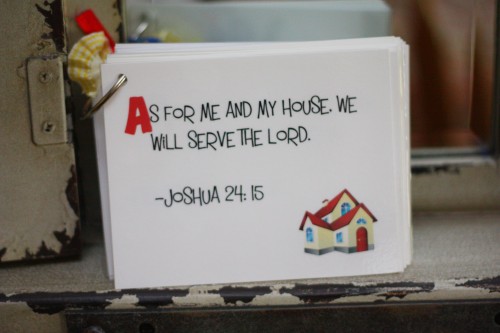 I was inspired by the book My ABC Bible Verses, which I came very close to buying. After flipping through it at the book store, however, I realized that many of the scriptures were in the King James version. We rarely use the King James version in our house (since the language used isn’t one that our kids understand), so this didn’t make sense for us. I used a variety of translations for the abc bible verses I chose, including the New International Version, the Contemporary English Version, the New Living Translation, and the KJV (for the letter “t”). I also used Impress Your Kid’s ABC Scriptures as a reference for some of the verses I chose for these scripture cards.

We’re planning on working with the boys (mostly Big Brother) on memorizing one verse each week. There are four alphabet letters and scriptures per page.

After printing out these ABC Scripture Cards on card stock, I first laminated them. I have this laminator and love it! Then, I hole-punched each scripture card and used a binder clip to keep them all together! A little ribbon tied onto the binder clip makes it look a little cuter. :)

I hope that you will find these bible verses for kids to be a blessing to you and your family!

A Greener Version of the ABC Scripture Cards

I updated the ABC bible verses so that they could be printed on both the front AND back of each piece of card stock. This will take a little bit of effort on your part to ensure that the paper gets fed into your printer correctly (and facing the right direction). You also must select ‘reverse page orientation’ on the back sides ONLY of each page when you are printing it.

I decided to print the scripture cards this way because I wanted to make some to send to the mission we support in Zimbabwe as well as share with others in our area. Making several sets of these would be much too costly and time-consuming with the original layout.

I also changed the picture for the verse “A” because obviously, not everyone will have a home that looks like the one depicted in the original ABC scripture cards. The clip art that replaced it is still not representative of all family types but at least it doesn’t show a home being an architectural structure, rather a family unit.

*Make sure you choose the option to ‘reverse page orientation’ on your printer settings on THIS page ONLY.*

So now instead of using 7 pieces of cardstock…you’re only using 4!

If you choose to laminate them, you only need 4 laminating pouches. I highly recommend laminating them, especially if you review your memory verses at the dinner table! We have had this laminator for over a year and a half and we love it. I buy the generic pouches from Sam’s, which are very affordable!

Books of the Bible Activities for Kids