We took a little field trip to learn about Day 6 of God’s Creation…it was a beautiful day so we went to the zoo! What better way to “learn” about God’s creation than seeing it firsthand, right? 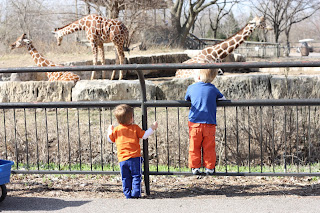 *The words to this verse don’t rhyme. It honestly drives me crazy…but nothing works for this day that rhymes with “six”. :)