My 4-year old daughter just had her tonsils and adenoids removed after having a strep infection that would not go away after four courses of antibiotics. In all honesty, I was terrified of what the recovery was going to be. We debated over and over in our heads if this was the “right” thing for her.

Her surgeon said after the surgery that he knew her tonsils were big and nasty, but he had no idea that her adenoids were so HUGE as well. This has probably been affecting her sleep for a long time. So although it was an extremely scary procedure to put our child through, for her long-term health it was definitely the right decision for her.

With all that being said, the recovery is certainly not a walk in the park! My daughter did great the first three days and rarely complained. Then day four came with a FURY and she was miserable. The best description for helping your child recover from a tonsillectomy is that it feels like you have a newborn in the house again (ahem…waking up every 2 hours or more), only it is much worse because your child is in PAIN and there is nothing you can do about it.

I’m sharing some tips to help your child recover from a tonsillectomy. This is NOT medical advice…just a few things that we found helpful as parents. If you are unsure about anything during your child’s recovery, be sure that you speak to your doctor.

1. Prepare your child ahead of time.

Just like with anything unfamiliar, preparing your child for something big and scary like a tonsillectomy is extremely important. We talked a lot about the surgery in the days leading up to the procedure. We talked about how we would go to a hospital, how she would go to sleep and wouldn’t feel anything, and then she would wake up and her throat would be sore for several days. We were very honest but we also remained positive. We read a kid-friendly pamphlet give to us by her ENT’s office that was similar to The Magic School Bus (I also found the book Good-Bye Tonsils by Craig Hatkoff that received great reviews but we didn’t end up ordering it as the pamphlet from our doctor sufficed).

2. Celebrate the night before.

Let your child live up their last day before the tonsillectomy surgery! We went out to eat the night before and our daughter got to choose the restaurant. She ate as many french fries as she wanted and then got ice cream too. She felt super special!

A friend of mine threw a “Goodbye Tonsils” party for her daughter. She invited her friends and had all of her favorite treats. They even had a “pin the strep on the tonsils” game!! I thought that was a great idea to help a child remain positive about something so scary! 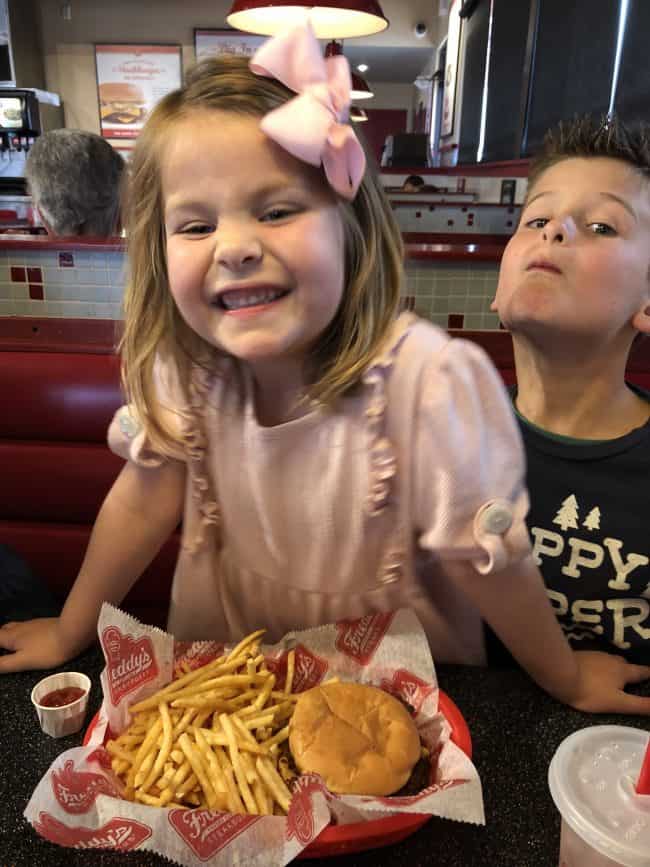 3. Take your child to the store to pick out his/her post-surgery food and drinks.

The best thing I did leading up to the tonsillectomy was to take my daughter to the store and let her pick out her own special treats. We bought Popsicles, pudding, jello, milkshakes, smoothies, oatmeal, squeeze applesauce, and more. She got to take ownership of what she wanted and was so excited to show her dad and brothers her special treats for after surgery.

I also let her pick out a little toy to play with while she was home recovering. She was so joyous and excitedly told everyone we saw in the store that she was getting her tonsils out the next day! We also rented several new-to-us movies that made the first few days more exciting.

In addition to the sugary, pre-packaged snacks, some other food that my daughter ate was broccoli cheddar soup (from Panera…this was the most requested food for her), avocado, and instant mashed potatoes.

4. Follow your doctor’s instructions and stay on top of the pain.

I’m amazed how as moms we often think that what we read online can compensate for 8+ years of medical training. Your doctor is the expert:  Follow his/her advice and protocol for tonsillectomy recovery. Period.

My daughter’s doctor prescribed ibuprofen and acetaminophen for pain, alternating it every 2 hours around the clock for the first 3-5 days and then slowly weaning down. I read online that some doctors say not to give ibuprofen, but our daughter’s doctor does not give narcotic-type pain meds to children her age so we trusted his wisdom and explicitly followed the directions he gave us.

As far as pain goes, set an alarm on your phone (even in the middle of the night) and be consistent in giving the meds. It is extremely difficult on your child if you wait until they are in enormous pain to give the medication, so you want to stay ahead of the pain by giving it on the clock according to the doctor’s orders.

This was probably the single best thing we did during my daughter’s tonsillectomy recovery. I pre-measured the ibuprofen and acetaminophen in the syringes and put them on my dresser with labels on the time to give them. Whenever the alarm on my phone went off, I could just grab the syringe and go to my daughter’s room and give her the meds quickly and efficiently with as little interruption to her sleep (and mine) as possible. Just be sure to put any medication out of reach for any children in your household, especially those who might be active during the night.

6. Keep ice water in a YETI Cup beside your child at all times.

Everyone will tell you that staying hydrated is the most important part of your child’s recovery. We found that my daughter tired of sugary drinks and even smoothies but keeping a super cold cup of water next to her all the time helped her stay hydrated. I have yet to find a cup that can keep water as cold as a YETI cup! The 20 ounce cup worked perfectly for my daughter. If your child doesn’t want to drink water, put their favorite drink in a cup as it will stay colder for so much longer!

Another tip I heard was to put water or your child’s favorite drink in a spray bottle. Then if he/she refused to drink, you could at least spritz some into his/her mouth.

7. Run a humidifier at night.

Consider dryness your nemesis as your child recovers from a tonsillectomy. Just like you want your child’s mouth/throat cool and wet, you also want as much moisture as possible in the air (especially at night). Run a humidifier or diffuser to try to keep the dry air at bay.

8. Expect that the tonsillectomy recovery will get much worse before it gets better.

Your child might breeze through surgery and recovery with flying colors and barely bat an eye (or you might have a much more traumatic post-surgery experience…every child is different). Just keep in mind, however, that the tonsillectomy recovery usually gets worse before it gets entirely better. I don’t say this to be a negative Nancy, but as a realist who has talked with MANY other parents.

After the first 4 or 5 hours post surgery, our daughter was acting nearly herself…up and around, wanting to play with whoever stopped by to see her. For the next 3 days, she never once complained about her throat hurting (we continued giving meds every two hours anyway as our doctor specified). We thought we had conquered this tonsillectomy thing like champs! During the middle of the night on the 4th day, however, everything went south. She suddenly hurt and hurt badly. I’m not sure what causes the intensity of pain to increase a few days after surgery, but I have heard from many other people that this pretty typical. For some kids, the worst days are 4-5 days after surgery and others it is 7-8 days after surgery. But your child should start feeling better around a week post-surgery and back to normal by two weeks.

9. Find ways to keep your child occupied (and be okay with copious amounts of TV).

There were two things that worked to keep our daughter occupied:  letting her watch as much TV as she wanted (including renting Redbox movies and hours of Goldie and Bear on Netflix) and the Ivy Kids literature-based activity kits. When she was feeling lousy, she watched TV to take her mind off the pain (as soon as the TV went off, it seemed that the pain compounded). When she was feeling a little better, we read books and did one of the dozen activities from our Ivy Kids box. Having visitors also seemed to brighten her spirits most of the time!

The recovery from a tonsillectomy stinks even under the best circumstances. Your child will be pretty miserable for at least a week, maybe two. But they also bounce back so incredibly fast! I am posting this 12 days after my daughter’s tonsillectomy and she is completely back to normal, sleeping through the night, and eating everything she ate before surgery!

How to Get Rid of Head Lice
Categories: Ask the Doctor, Helpful Hints for Parents, Parenting, What Works for Us