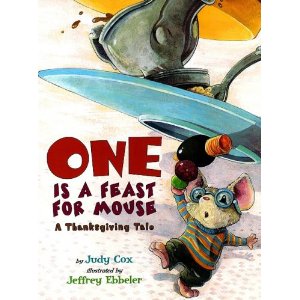 My friend Susan recently suggested this book to me and the boys have really enjoyed it! One is a Feast for Mouse is about a little mouse who finds himself a feast at the dinner table with the leftovers of the Thanksgiving meal. At first, he only wants to take one tiny, green pea because “one is a feast for me.” He is soon tempted to add more and more to his feast, making it increasingly difficult to carry. The story of Mouse and his feasting adventures is humorous and the illustrations are engaging.

Although it is mostly a silly, light-hearted read, the moral of the story is not to be greedy and to be thankful for what you have (just as Mouse was thankful for his one green pea at the end of the book).

I read this book aloud to the boys and then we talked about whether it would have been better for Mouse to take just one item from the table (or even one at a time) or whether he should have tried to carry all of them at once like he did in the story. We acted Mouse’s part out using our Melissa & Doug Jumbo cardboard blocks, but you could also use beanbags or other household items. Finally, the boys had a relay to find out whether it was faster (and more effective) to make multiple trips by carrying one item at a time or stacking them all on top of each other and attempting to carry it.

I set out 8 blocks of various sizes in 2 separate piles. I instructed Big Brother to attempt to stack them and carry them all at once. I instructed Little Brother to  bring me one block at a time. Big Brother was certain he would win as he only had to walk a few feet to where I was sitting.

Little Brother quickly began running back and forth with the blocks.

Big Brother was initially quite confident that he would win. Before he knew it, Little Brother had delivered all his blocks to me and Big Brother was still attempting to stack his.

This book and relay activity would be a fun way to get some movement into your Thanksgiving holiday!