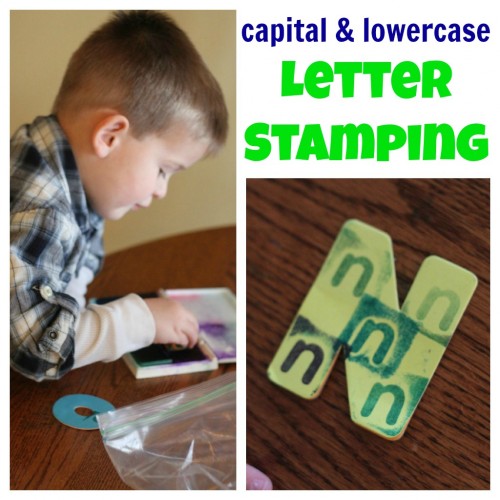 This Capital & Lowercase Letter Stamping  idea was inspired by two things I found (that I had forgotten about) as I was organizing after Christmas. Little Brother and I did this activity a while ago, but I am just now getting around to sharing it.

The concept is simple–let your child use the lowercase alphabet stamps to stamp on the capital letters. If you don’t have the letter sticky notes, you could easily do this by cutting out letters of the alphabet from construction paper. I chose to only do the letters of Little Brother’s name.

Here’s what you’ll need:  Quick Letter Pads (I found ours at Target a while ago), an ink pad, and some foam alphabet stamps (which we received compliments of CraftProjectIdeas.com).

1. Lay out all the materials and show your child how to hold the lowercase letter so that it stamps right-side up. 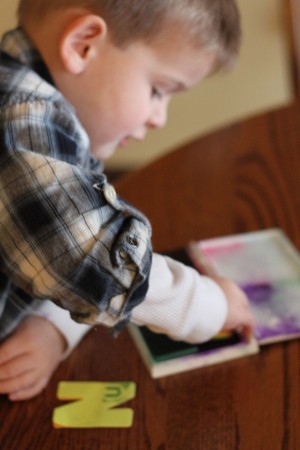 Keep going until you fill the capital letter up! Not only was this great for letter recognition, it also was beneficial for developing fine motor control.

Don’t forget…get my brand new eBook for just $3.99 as a PDF or on your Kindle (or Kindle app).

How to Learn at Home During a Pandemic
Categories: 2-3 years, 3-5 years, School Age