This month’s book in the Virtual Book Club for Kids series we are participating in with some of our favorite blogger friends is Goldilocks and the Three Dinosaurs by Mo Willems. This book is a joy for parents and children alike…it has dinosaurs for little ones and a good dose of sarcasm for the grown-ups!

As you can imagine based on reading the title, this hilarious book is a spin on the classic Goldilocks and the Three Bears story. Mama Dinosaur, Papa Dinosaur and some other Dinosaur (who happens to be visiting from Norway) set a trap for a “chocolate filled little girl bon-bon” using three bowls of chocolate pudding, chairs, and beds. Along comes a “poorly supervised little girl named Goldilocks” who takes the bait and traipses into their house, fully suspecting it to be the home of a family of bears. Once she realizes it is the home of dinosaurs, she tries to escape. Is she successful? You’ll just have to read the story to find out!

Although Mo Willems’s humor and sarcasm might be lost on the little ones, it will still be an enjoyable book especially if they know the original. This is one of our current favorite read-alouds and even Little Sister enjoys it!

A few times throughout the book, the Dinosaurs mention their anticipation of devouring a chocolate-filled little girl bon-bon. Since that seemed a bit creepy, we decided to reverse the story and make chocolate-filled little dinosaur bon-bons instead! :)  They ended up looking a little more like martians than dinosaurs (due to my lack of cookie decorating skills), but my kids still thought they were pretty awesome nonetheless.

1. Use a food processor to turn your oreos into crumbs! I do half a package at a time in our Ninja and it works great!

3. I use a cookie scoop to get the “dough” and then roll it by hand.

4. Line a cookie sheet with waxed paper and put the Oreo balls on the waxed paper. Freeze for at least 20 minutes (this will help them stay together when you dip them in the candy melts).

6. Follow the package directions on the candy melts to melt them in the microwave.

7. Use a skewer to dip the Oreo balls into the melted green candy. Work quickly to add the candy eyes and M&Ms for the spines.

8. Put back into the freezer for an hour. I used some green gel icing to attempt a smile, but it didn’t come out nearly as clearly as I hoped. 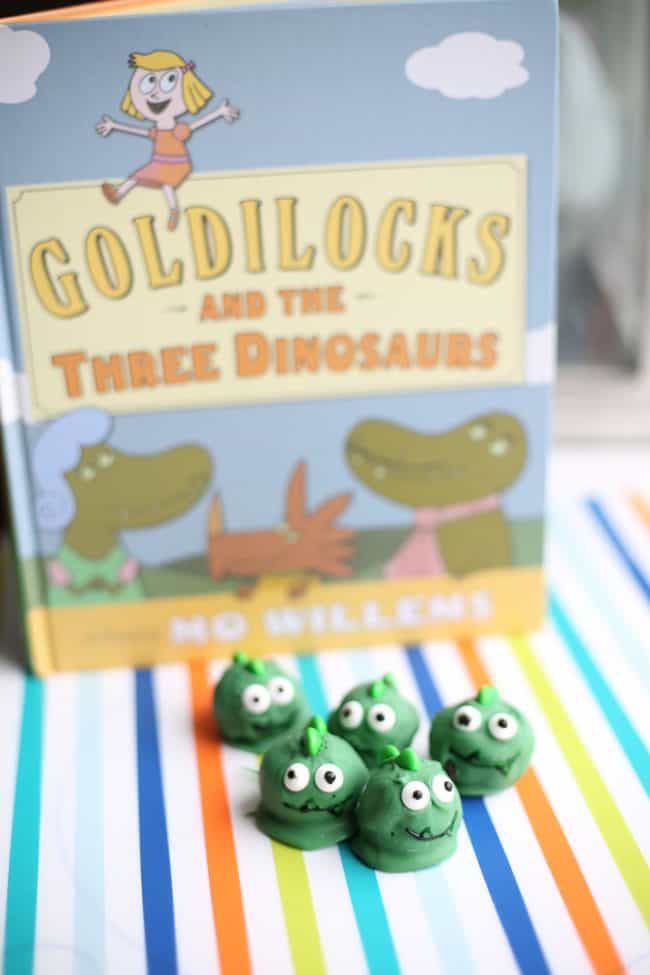 These little dinosaurs don’t last long! I made

Check out more activities to do after reading
Goldilocks and the Three Dinosaurs:

How Many? Questions for Dinosaur Math  ::  Rainy Day Mum

Dinosaur Shapes ::  The Educator’s Spin on It