We have been in the midst of transforming our home office into a mudroom for the past month, which partially explains the infrequency of posts over the last few weeks. Since I now have a laptop, our “office” had become nothing more than a dumping ground (remember this post?) instead of a functional room. Since it is right beside our garage, we decided to make it into a mudroom instead! My husband knocked down a small wall, repaired sheetrock, installed a new door to the garage (as well as the way the door swings) and put up the board and batten. My job has been to paint and decorate. Not a bad trade…but it still took me a loooong time to get anything done!

We had originally planned on installing cubbies, but they were going to be way too pricey to buy and way too time consuming for my husband to make himself. I purchased an antique bench/pew from Craigslist and decided we would use that along with some hooks to achieve the same purpose. I really wanted a place to put shoes and other random junk, though, so I wanted to find a way to add some storage underneath the bench.

I have been admiring rolling storage bins like this and this for some time…but they are SO darn expensive. I saw some wooden crates at Home Depot the other day for $7.99 and knew they would make a perfect rolling bin once I added some casters and a little paint! I normally rely on my handy husband to help me with any home projects, but this one I tackled all on my own. :)

In total, I spent about $15 on each storage bin (which is less than 1/3 of the price of the store-bought options) after I purchased the crate, casters, screws, washers, and hardware. I used the same primer and paint that we used for the board and batten.

1. Prime and paint each crate. I’m not gonna lie, this was a time-consuming process! I used a roller for most of it, but had to use a small brush to get between each slat. I primed each side (including the bottom) and then put 2 coats of paint on the outside of the crate only. 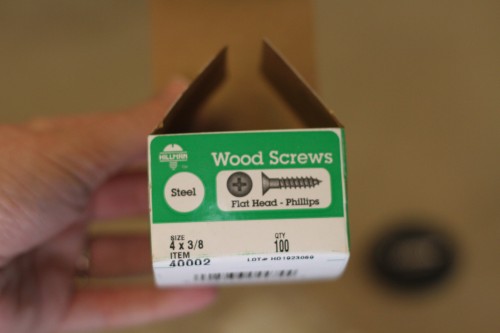 2. After your crates are completely dry, prepare to install the casters. Because the wood slats were so thin, I had to buy different screws (and washers). I used 3/8″ wood screws along with 1 washer for each.

4. Measure and decide their placement. I didn’t want the casters to be very noticeable, so I placed them in 1 1/2 inches from the edge and all the way to the innermost part of the first slat. You’ll do this 4 times for each bin.

5. Screw them in (make sure you use a washer with each screw). 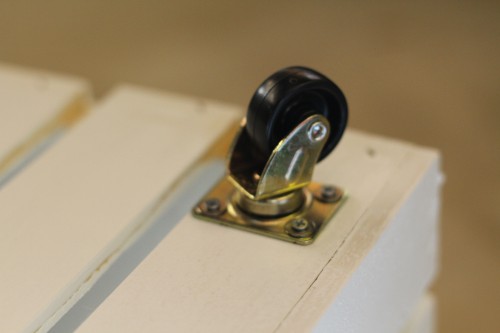 Casters are screwed on and ready to roll! 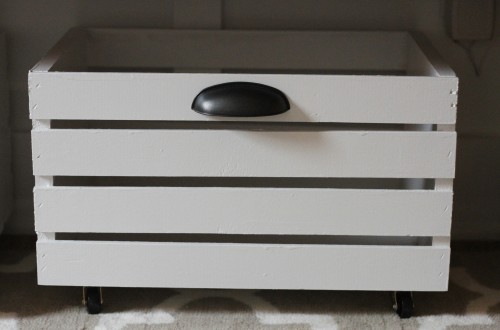 6. Add some hardware to dress them up (I was surprised how much of a difference this made). I used the same pull knobs that we used on the small desk also in the room (they were around $4 each).

Finally! Every shoe has a home. :)  As soon as the boys come in the garage, they yank their shoes off and put them in their own bin. No more rushing around and hunting for shoes in the mornings!

Here is our “new” little desk from my grandmother’s house that we painted in Sherwin Williams “Halcyon Green” (which is actually more of a robin’s egg blue) and added the pull knob. The sewing stool, which happened to fit perfectly with the desk, was given to me several years ago from my mother-in-law (also painted with the same color and reupholstered with burlap). The lamp is from Target and the baskets are from Hobby Lobby. 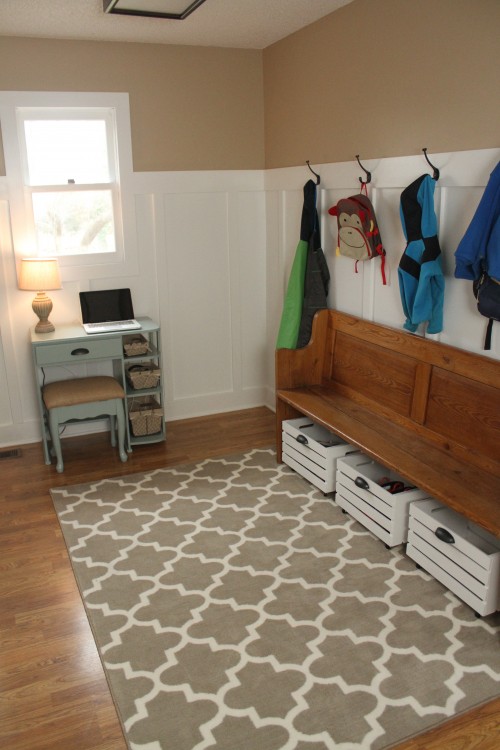 The finished product! I thought about taking all the stuff off the wall prior to the picture, but that wouldn’t show what it really looks like now, would it?

The boys are enjoying the room and so am I! And in case you’re wondering, the rug is from Target. It’s a little more modern that what I would normally choose, but I absolutely love the way it looks in the room.

What is your favorite storage solution in your home???